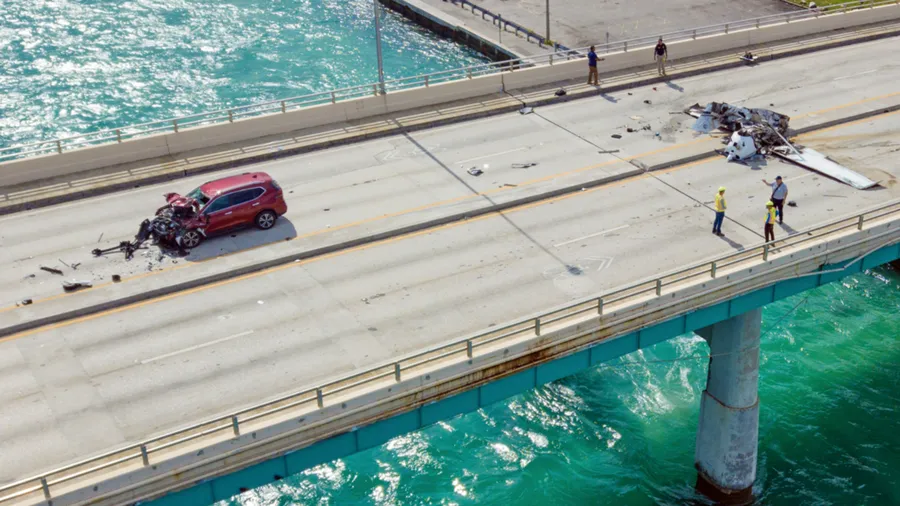 The plane crashed this Saturday on an access bridge to Miami Beach, Florida, killing one person and injuring five, two of them in critical condition, authorities confirmed.

Although authorities initially said only six people were injured as a result of the incident, the Miami-Date Police Liaison Department confirmed at a news conference that one person had died.

Authorities said the condition of two of the injured was critical.

The injured were taken to the Ryder Trauma Center at Jackson Memorial Hospital in Miami, while others were taken to local hospitals with life-threatening injuries.

“Three rescue workers from the Miami-Tate Fire Department began assisting patients when the plane was on fire, except for the vehicle in which the plane collided,” said Erica Benitez, a spokeswoman for the fire department.

According to official sources, a vehicle traveling on the bridge collided head-on with a plane just after noon today.

Police said a woman and two small children were being treated in the vehicle with life-threatening injuries.

The single-engine plane caught fire, emitting black smoke, which attracted attention with the sound of impact, and passersby and bathers in the area filmed the incident on their phones.

Firefighters said the fire had already been extinguished and appropriate action had been taken due to a fuel leak.

Pictures aired on the local television portal NBC6, taken from a mobile phone, showed the device engulfed in flames, while a dozen drivers passing through the area left their cars.

Authorities confirmed that the incident took place at the Hollower Inlet Bridge, one of the bridges connecting Miami Beach Island.

See also  Three Venezuelans have been killed in northwestern Colombia

According to the Federal Aviation Administration (FAA), the plane was a single-engine Cessna 172 that lost power just before noon today before crashing on a bridge about 5 miles (8 km) east of Oba-Loka Airport.

There were three people in the plane, and local Channel 10 took over without any news of their identity.

The Collins Avenue area between 96th and 163rd Streets has been closed for investigation by the FAA and the National Traffic Safety Board, the Miami-Tate Police Department said on Twitter..