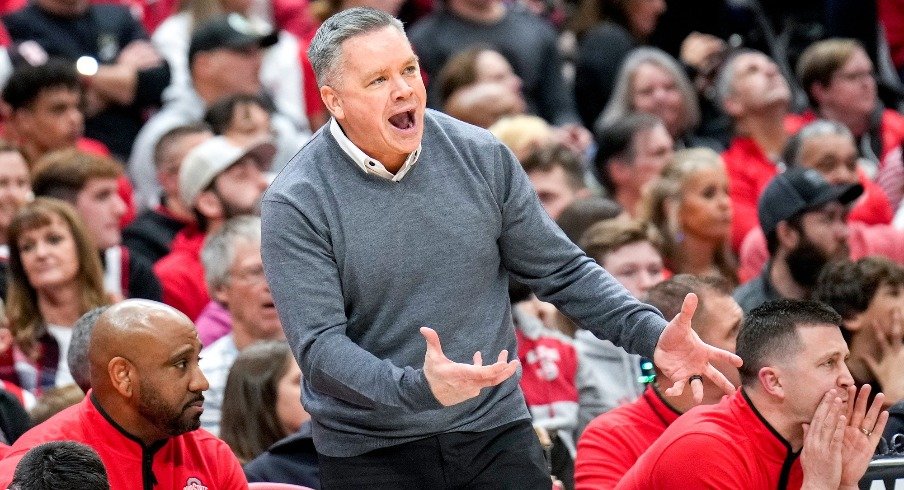 The hole is getting deeper for the Buckeyes.

Ohio State’s losing streak has now stretched to five games after losing 63-60 Wednesday on the road at Nebraska, which was the second-to-last-place team in the Big Ten going into the night. The loss comes just six days after the last-place Buckeyes fell to Minnesota at home, and Ohio State has now tied its longest skid of the Chris Holtmann era.

Points were hard to come by in a first half that saw both teams shoot 30% or less. After playing from behind for most of the period, the Buckeyes put together a quick spurt in the closing minutes of the half to steal the lead before the break.

It didn’t stick, though, as Ohio State’s frequent turnovers and Nebraska’s clear lead in inside scoring helped the Huskers take control late in the second half. The Buckeyes trailed by just 2 points with 10 seconds left in the game, and still had a chance to send the game into overtime with one last shot.

With Brice Sensabaugh already fouled, Sean McNeil’s attempt to tie the game broke at the buzzer.

The offensive struggles that have plagued the Buckeyes in the past few games followed suit in this game. Ohio State hit only one of its first 11 shots from the ground, although the Huskers only hit two of its first 10 shots on the other end.

But Nebraska had the early advantage, leading from 18:06 to 1:47 as the Buckeyes continued to struggle. Sensabaugh and Justice Sueing combined to miss the first 11 shots from the ground while the Huskers managed to be more effective on offense.

Despite Ohio State’s offensive ineptitude, Nebraska’s struggles left the door open for the Buckeyes to take a one-point lead on the back of a 7-0 run with less than two minutes left in the half. The Buckeyes held a 22-21 advantage when the buzzer sounded headed for the locker room with a shot despite being behind at 16:20 of the period.

Ohio State shot only 26.7% from the field and 14.3% from the 3-point line, but seven Nebraska turnovers and a 3:12 drought to end the half helped the Buckeyes get back on top. The Mummy only hit 30% of their shots in the first half and missed three of their four free throw attempts.

Ohio State scored 10 of the first 16 points of the second half to earn some breathing room with a five-point lead at the 16:10 mark. But the Huskers responded with consecutive three-pointers in the next 58 seconds to regain the lead in a media timeout of just under 16 minutes.

Zed Key scored five straight points from 14:22 to 12:45 to take Ohio State from less than three to two, and the Buckeyes had another opportunity to advance with possession of the ball after Husker coach Fred Hoiberg was whistled for a technical foul. But McNeil, who hadn’t missed a free throw all season going into the game, missed both attempts.

Both teams traded buckets and then took the lead with each side significantly heating up their pace in the first half due to offense. Sensabaugh scored seven straight points for Ohio State in a two-minute span to give the Buckeyes a two-point lead at 8:55, but Nebraska had an answer as they shot 8-0 for a 55-49 lead. Ohio State’s three turnovers in less than four minutes contributed to Husker’s boom.

And by 3:41, Ohio State hadn’t hit a shot in over five minutes of game time, as Nebraska held their lead with two possessions.

The Buckeyes cut it to a three-point game with 2:20 to play, and Ohio State was two points clear of the Huskers with 1:48 left on the clock. Ohio State still had a chance in the final 40 seconds as Sensabaugh made a three-pointer drop to put it three points behind.

Ohio State had one last chance to tie the game in the closing moments, but McNeil’s three-pointer was just wide of the mark.

See also  Casemiro: "I realized that my time at Real Madrid was ending after the Champions League final"