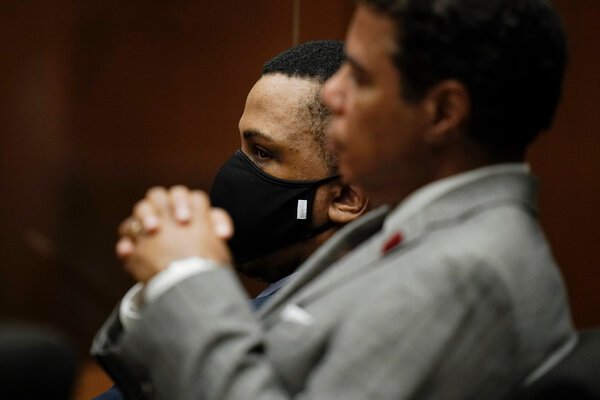 Brianita Nicholson, who was interviewing the defendant, Eric R. Holder Jr., testified that she pushed him to and from the shooting scene, and provided one of the episode’s main prosecution accounts.

She testified that the day of the shooting began unremarkably. She and Mr. Holder had met a little over a month ago, when she was driving part-time for Lyft and took it as her fare. In the weeks that followed, she said, they got closer, and she often led Mr. Holder on outings in Long Beach or Los Angeles, to the beach, to the Hollywood Walk of Fame. She said their relationship was casual.

On the day of the shooting, Ms. Nicholson testified, and the pair were headed for a close exchange meeting. Ms. Nicholson was granted immunity from prosecution for her testimony.

When Mrs. Nicholson walked into the yard that day so Mr. Holder could buy a chili-cheese fries, she said, she saw Nipsey Hussell standing outside his store, marathon clothes. She notices to Mr. Holder that she thinks Hustle is handsome, and that she wants to have a picture with him. She testified that Mr. Holder did not indicate that he knew the rapper from the neighborhood.

She testified that she approached Hussell, who was surrounded by a group of men, for a selfie. It will be the last photo of the rapper.

Some witnesses testified that Hussle warned Mr. Holder that there were rumors circulating that he had cooperated with law enforcement, or had been slandered. Mrs. Nicholson testified that she heard Mr. Holder ask Hussell if he had been afraid, but Hussle seemed to be ignoring him. She said she got back in the car and drove into a nearby alley so Mr. Holder could eat, she said.

Holder then pulled out a pistol, and Mrs. Nicholson testified that it annoyed her, but had previously said she believed he had weapons for protection.

Then Mr. Holder got out of the car and left French fries on the hood of a nearby truck, she said. Ms. Nicholson said she heard gunshots shortly thereafter.

When Mr. Holder got back to her car, she testified, and told her to drive or slap her. She testified that she did not realize at that point that he might have been the shooter. That night, she testified, agreed to allow Mr. Holder to stay at her mother’s house with her, and later helped him check into a hotel using her ID.

She testified that it was not until more than a day after the murder that her mother recognized Mrs. Nicholson’s white car, Chevy Cruz, on the news, and realized Mr. Holder might have been involved.

“I was hoping he had nothing to do with it,” Ms Nicholson told John McKinney, the prosecutor in the case, during her testimony. “I was a nervous wreck at the time.”

In his opening statement, Mr. McKinney portrayed Ms. Nicholson as a kind of unwitting partner.

“When Mrs. Nicholson gives testimony, pay attention to her,” he said. “I think you will find in it naivety and simplicity.”

Mr. McKinney confirmed that Ms. Nicholson quickly agreed to cooperate with the police. She allowed authorities to access the data from her phone and gave hours of interviews.

She testified in court, “I was thinking, ‘Oh my God, that’s my reputation, too.'”

Aaron Jansen, Mr. Holder’s public defender, asked Mrs. Nicholson about some slight inconsistencies between her earlier account and those she presented on the podium: the color of the truck in which Mr. Holder left french fries, and whether Hussell had told Mr. . (Ms. Nicholson replied that Hussle’s behavior was “cool,” and said he had not ordered Mr. Holder to calm down.)

At the witness stand, Ms. Nicholson mostly answered questions calmly, “yes” or “I don’t know.” Mr. Holder, who was dressed in a gray suit with a faint pattern of windowpanes, mostly averted her eyes or looked at her with affection.