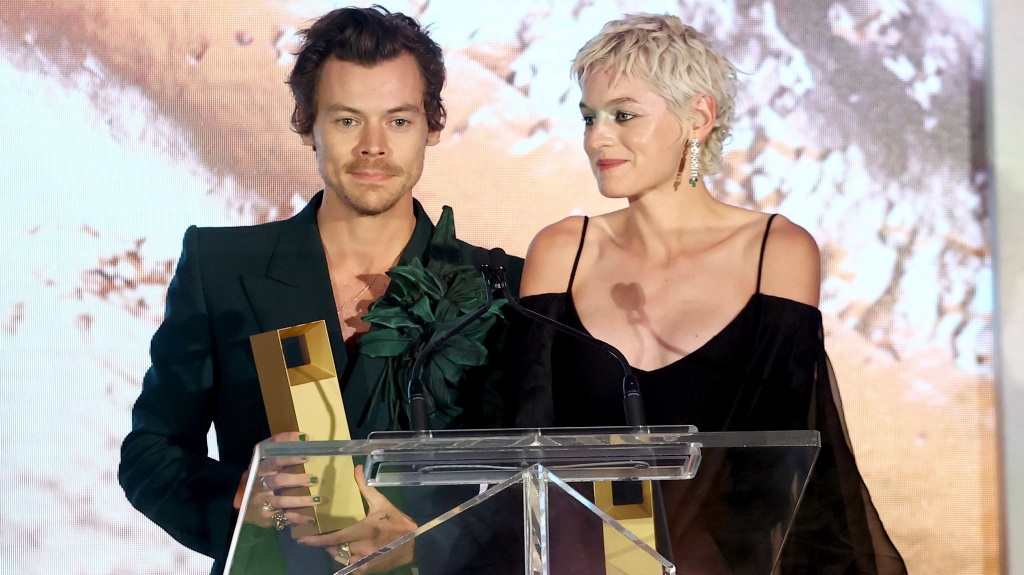 On stage at Madison Square Garden in New York City, Harry Stiles He is a gorgeous rock star, full of bragging and self-confidence as he performs in front of 20,000 adorable fans. But Styles, the actor, was quiet as he accepted an acting award for one of his first major film roles at this year’s Toronto International Film Festival.

Styles – a man of relatively few words – and the “Police” crew received the band’s award at the festival’s Honor Awards on Sunday night.

“A big thank you to everyone here, on behalf of all of us, for this amazing and wonderful award,” said Styles, who stars in the romantic drama as a closed-door police officer. “We all loved working on this movie so much. We hope you enjoy it.”

With that, Styles, who was carrying star Emma Corinne’s train, left her long black dress, just as quickly as she entered Fairmont Royal York, where the annual party is being held.

But there were plenty of other listeners to maintain the power of the three-hour celebration. Although the festival went on for several more days, Toronto held its fourth annual awards, with winners including the “Whale” star. Brendan FraserDirector Sam Mendes Michelle Yeohand Hildur Guðnadóttir, Academy Award-winning composer for “Joker,” “Women Talking,” and “Tar.”

Luckily for the TIFF organizers, the always charming Olivia Colman was next to take up the catwalk after leaving Styles and the company. The Oscar winner was on hand to award Sam Mendes an Ebert Director Award. But all she could say before the room went dark to play a reel of one of Mendes’ highlights was, “It’s my pleasure to present the TIFF Director’s Award to Sam Mendes,” causing her eyes to widen in shock. Get everyone in the audience laughing.

Mendes, whose latest film “Empire of Light” is a poignant poem for cinemas and screens at the festival, received a standing ovation. It was too much for the British director.

“It wasn’t necessary at all,” he said.

Since the event was not televised, Mendes joked that he could talk for as long as he wanted. Indeed, the “American Beauty” and “Skyfall” director gave an extended speech about his career and his collaborations with talent including cinematographer Roger Dickens. He attributed his profession to more than just his work. “You also need a damn great deal of luck.”

Michelle Yeoh was the inspiration for the second “O” stand of the night. Before she reached the podium, everyone in the lounge had already got on their feet to greet the famous actor. She received the Share Her Journey Groundbreaker Award tonight, which was accompanied by clips from “Crouching Tiger, Hidden Dragon”, “Crazy Rich Asians” and other blockbuster films of her icon.

Watching a compilation of her work, she says, “I remember how long I’ve been in this business. The nicks, bumps, and scrapes along the way.” But she adds, “Despite all the challenges, I cherish every moment. I hope to do so for many years to come.”

During her speech, Yeoh pushed the entertainment industry to amplify women’s voices, saying, “As women, we are privileged to work in one of the most open and forward-thinking industries. However, women are still grossly underrepresented at the upper echelons of our industry. In addition to the need to To be twice the quality [we’re] Often half the compensation.”

Oscar-winning songwriter Buffy St. Mary, who received the night, spoke about the importance of Aboriginal representation in Aboriginal roles. “It is more important than deceiving white people,” said St. Mary. “These people will bring their entire cultures into your films. Can you imagine choosing The Sopranos without Italians?”

Later, during a dessert break, Fraser reunited with Yeoh, his co-star in The Mummy 3. At a table near the front of the room, Coleman and Mendes held court while fans approached them to praise their work.

Sunday night’s event continued an emotional start to the Fraser Awards season, Tears erupted at the world premiere of Venice Whale. His performance as a 600-pound gay man confined to a wheelchair is expected to put him at the forefront of Best Actor at this year’s Oscars. His performance was equally embraced at TIFF (although the standing ovation was a bit shorter).

At Sunday’s party, Fraser once again appeared visually emotional as Aronofsky introduced him by saying, “We need more people like Brendan Fraser, the man and the actor.”

For Fraser, “The Whale” marks the return of his career as his first major movie role in years. He thanked fans (“it’s the audience that gives cinema life,” he said) for “keeping me at the job I love.”

“Art is about taking risks, and you should know that [Aronofsky and screenwriter Samuel D. Hunter] They took a chance from me, and I will forever be grateful to them.” “The Whale is a story of redemption.”

Holding the cup, Fraser said, “This is new to me. Normally, I’m the guy on the platform who delivers these things.”

But given awards season, at least for now, Fraser may need to get used to the spotlight.