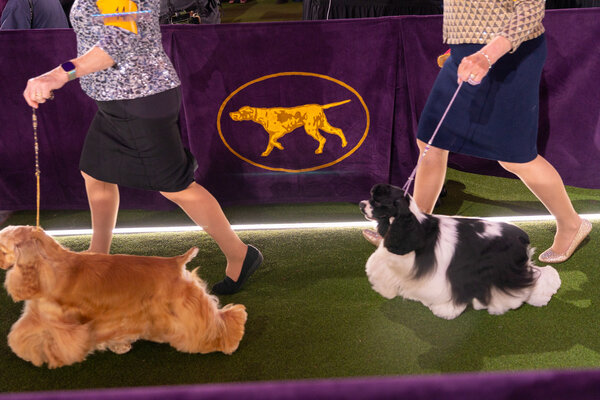 Donald Storrs, this year’s best judge of the show, has spent the past few days confined to his hotel room, insulating himself from any news of which dog has won the prize in the competition so far.

No Facebook, nothing,” Storrs, 60, said by phone. “I’m staying off social media. I posted a picture of me and my husband at the judges’ dinner on Sunday night, and then the radio went silent.”

The idea, he said, is that when he gets into the ring tonight, he’ll be free of preconceived notions.

“Part of the dream of this judging mission is that you walk the floor and you have no idea what seven dogs are coming in,” said Storrs.

Better judgment in a show requires special and peculiar skills. Dogs do not compete with one another, per se, but are judged on how closely they adhere to a specific set of breed standards, as set forth by the American Kennel Club.

“It has to do with the dog which has the most virtues as described in relation to its breed,” said Storrs. “They also need to pass on the essence of their bloodline in behavior, character, and transportation.”

With 209 different dog breeds competing in the show, Sturz should be intimately familiar with the breed standards for each of them. So he was taught, mostly by looking at endless pictures of dogs in books, magazines, and on the Internet, to fix in his head a mold of each breed, a kind of platonic ideal.

Ordinary people who watch dog shows for their favorite dogs – showy golden retrievers, for example, elegant Afghan hounds or goofy shepherds – often take root without realizing that these traits are not necessarily virtues in the judge’s eyes.

“There are some breeds that fit into the setting of the show,” said Storrs. “They are more energetic, brighter, more elegant, and have a greater presence. But what we are looking for is what the breed is supposed to convey. Some breeds are supposed to be more discreet, calm and luxurious, and this speaks to the judge just like a dog standing there wagging its tail and jumping up and down.”

In real life, Sturz is the supervisor of Valley Stream 24 School District on Long Island. But he’s also a lifelong dog lover who has been attending dog shows for 50 years and has judged 32 of them, including in Westminster. This is the first time he has been awarded Best in Show.

When he spoke, Sturz didn’t yet know that one of the dogs in the finals would be a French Bulldog – and thus likely a personal favourite, given that there was a dog named Emmet in the house. (He also has a bull terrier, Lola.)

But he vowed that no matter what he faced, he would rule as an impartial observer, without fear or favour.