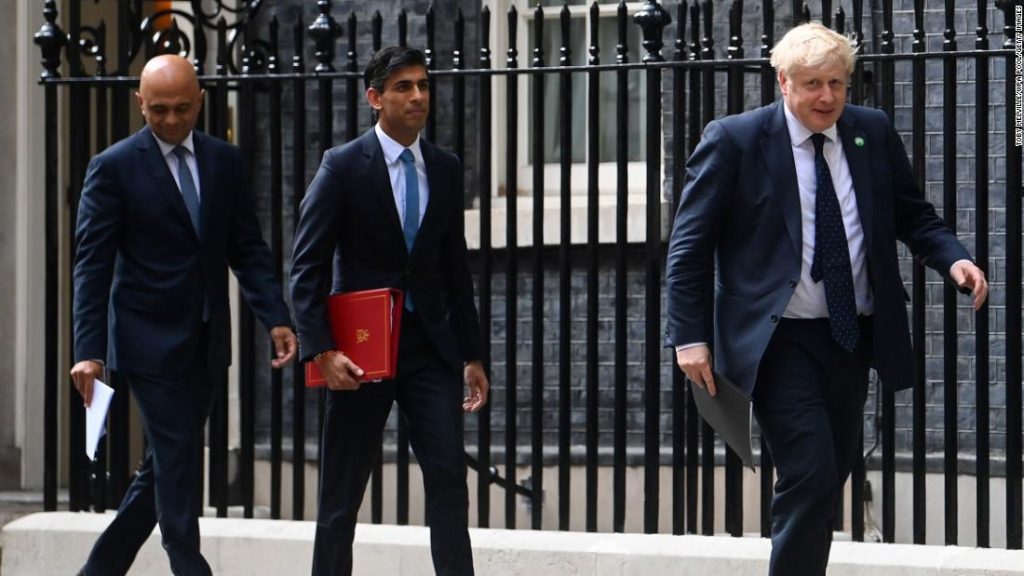 Chancellor Rishi Sunak and Health Minister Sajid Javid announced their resignations in messages posted on Twitter within minutes of each other on Tuesday night.

“The public rightly expects the government to proceed properly, efficiently and seriously,” Sunak said in his resignation letter. “I realize this may be my last ministerial job, but I think these standards are worth striving for and that’s why I’m resigning.”

“In preparation for our proposed joint address on the economy next week, it has become clear to me that our approaches are fundamentally very different,” Sunak added in the letter. “I am sad to leave the government but I have reluctantly come to the conclusion that we cannot continue like this.”

Javid wrote that “it was a great honor for me to play this role, but I am sorry that I can no longer continue in good conscience.” Javid added that last month’s vote of confidence in the prime minister was “a moment of humility, fist and fresh direction”.

Javid wrote: “I regret to say, however, that it is clear to me that this situation will not change under your leadership – and therefore I have lost my confidence as well.”

The most pressing controversy facing Johnson is the way Downing Street handled last week’s resignation of Whip Vice Chairman Chris Pincher, who resigned last Thursday amid allegations that he fumbled two guests at a private dinner the night before.

While he did not directly acknowledge the allegations, Pincher said in a letter to Johnson that “I drank too much last night” and “embarrassed myself and others”.

Downing Street has struggled to explain why Pincher was in government in the first place, amid a flurry of revelations about his previous alleged behaviour, denying Johnson anything specific about the allegations.

On Tuesday, it emerged that a complaint against Pincher had been filed at the State Department about three years ago and that Johnson had been briefed on what had happened.

Minutes before Sunak and Judd announced their resignations, Johnson admitted it was “a mistake” to appoint Pincher to his cabinet.

“I have received this complaint. It was something that was brought up with me very quickly, but I wish we had acted on it and that it did not continue in government because then it continued, I fear, to act, like as far as we can see – according to the allegations we have – badly. Very much,” Johnson said in a radio interview.

UK opposition leader Keir Starmer said it was “obvious” that the government was “falling apart”.

For months, Johnson faced a barrage of criticism over his behavior and that of his government, including illegal lockdown-breaking parties thrown in his Downing Street offices for which he and others were fined.

Johnson has faced several other scandals that have damaged his standing at the polls – despite winning a landslide 80 seats just two and a half years ago. These include accusations of improperly using donor money to pay for the renovations of his Downing Street home and flogging of MPs to protect a colleague who violated lobbying rules.

Last month, he He survived the vote of confidenceBut the final count of MPs who rebelled against him was higher than his supporters expected: 41% of his parliamentary party refused to support him.
But while he managed to win the confidence vote, he suffered another blow late last month when his party He lost in the parliamentary by-election In one night it raises new questions about his leadership.

According to a June 22-29 survey by Ipsos UK, Johnson’s Conservative Party is at its lowest level in more than a decade when it comes to being seen as “fit to govern”. Only 21% of respondents said it fit to govern – the lowest number for Conservatives or Labor since Ipsos began tracking that metric in 2011.

The chaos in Westminster had a ripple effect on financial markets, pushing the value of the British pound against the dollar to its lowest level in more than two years.

Downing Street did not hesitate to fill the vacant positions. Nadim Al-Zahawi, who was previously the Secretary of State for Education, was appointed as an advisor, while Downing Street Chief of Staff Steve Barclay became the new health secretary Tuesday night.

Javed and Sunak weren’t the only ones who went on Tuesday. Shortly after the two quit their jobs, Conservative Party Deputy Chairman Pim Avulami announced live on television that he, too, would be resigning. During an interview with Tom Newton Dunn of the News Desk, Afulami said: “I don’t think the prime minister has my support anymore…Supporting the party or the country anymore.”

Avulami called on Johnson to step down, then said he would also tender his resignation. “I think you should resign because I cannot serve under the prime minister.”

Alex Chalk, who served as the UK’s attorney general, a ministerial position in the attorney general’s office, also resigned on Tuesday, saying in his resignation letter it was time for “new leadership”.

“Being in government means accepting the duty to defend difficult or even unpopular political positions as it serves the broader national interest,” Chuck said. “But it cannot extend to defending the untenable.”

The Prime Minister’s trade envoy to Morocco, Andrew Morrison, also resigned, criticizing the “ongoing chaos of the past six months” and saying that Boris Johnson’s position “has become irreversible”.