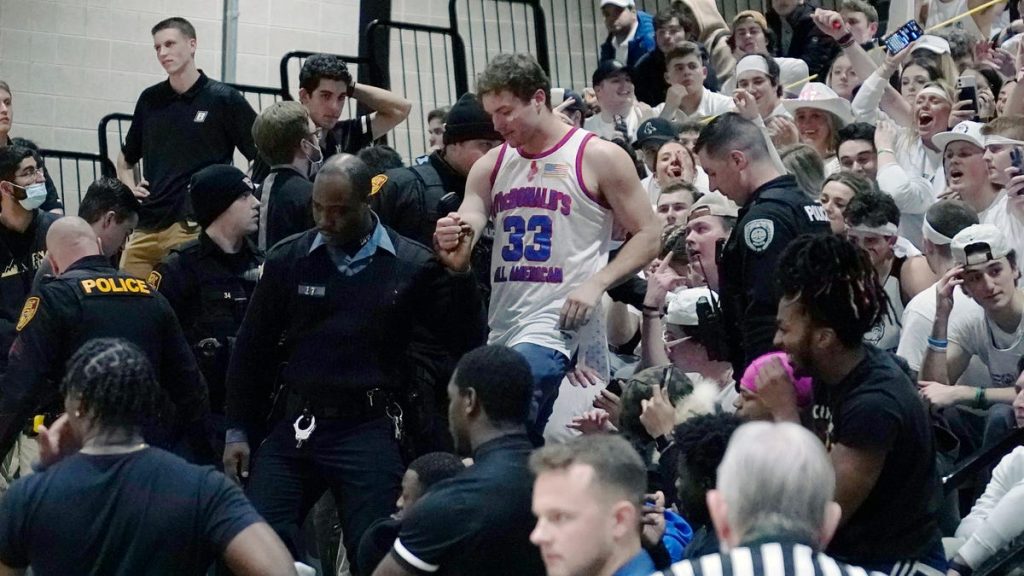 The Northeast Conference men’s championship game between Bryant and Wagner was significantly delayed during the second half on Tuesday night after a major battle erupted in the stands behind Wagner’s seat.

The game, which was held at Bryant’s Chase Sports Center in Smithfield, Rhode Island, was halted for about 30 minutes after skirmishes broke out during a layoff with the Bulldogs leading 68-32 by 4:37.

The fight seemed to be between visiting Wagner fans and Bryant fans. Several Wagner players had to be tied up, but none of them showed up in the stands. However, Wagner’s Will Martinez tried, and he was the only player sent off in the accident.

Sports Director Bryant Bill Smith grabbed the microphone, Setting the ground rules for after the match. He said Wagner’s players would have to leave the stadium before the fans flock to it.

Smith also said that fans will be taken out of the student section of the stands. It seems that Wagner’s fan section has mostly been wiped out and a few Bryant fans have been removed by law enforcement officials. Parents and family members were allowed back in at the end, with police and security acting as a buffer between Bryant’s students and Wagner fans.

In the end, the players of both teams returned to the field and finished the match, seemingly without incident.

“I didn’t see any of that – how anything started,” Smith said after the match. “All I know is we need to finish the game in a first-class fashion.” “Have the two teams return to the field, shake hands at the end and end the match.”

Smith said it was an “emotionally charged game” and that Bryant’s gym had no “natural barrier” for the visiting team.

“Unfortunately, I don’t think there was anything else we could have done to prevent what happened,” he said. “It was just a great night and we’ll move on.”

Bryant won 70-43 to earn an automatic bid for the NCAA Men’s Championship for the first time.