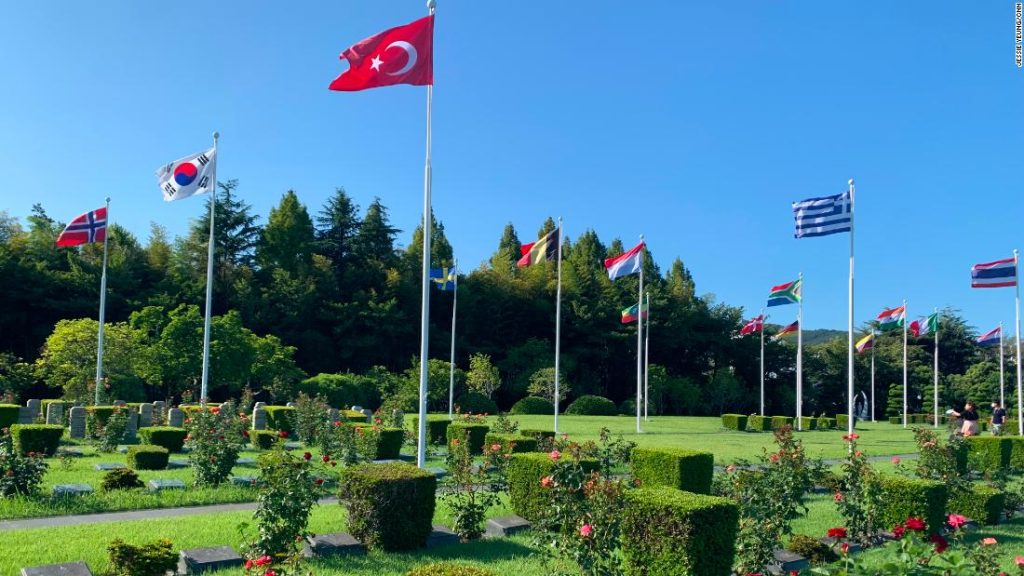 (CNN) – For more than 30 years, veteran British warrior James Grande has made an annual 5,500-mile trip to South Korea, to visit the graves of corpses he recovered as a young man who went to war.

Grande was only 19 years old when he joined the Korean War in 1951, according to the United Nations Memorial Cemetery in Korea (UNMCK). As part of a recovery unit, fallen soldiers were retrieved from battlefields across the Korean Peninsula and transported for burial at the cemetery located in the southern port city of Busan.

The cemetery remains the only UN cemetery in the world – and for many, it is a final meeting place for veterans, widows, and loved ones lost in the Korean War.

It was established in 1955 after the South Korean government offered the land for permanent use to the United Nations, to honor troops and medical staff sent from 22 countries under the UN flag during the war.

The United Nations Memorial Cemetery in Korea (UNMCK) in Busan on August 21.

Although most of these countries have returned the bodies of the dead, more than 2,300 people from 11 countries are currently buried there, according to UNMCK.

Many of these soldiers were later joined by loved ones who wanted to be buried together, including their widows and other family members.

Today, the cemetery is an idyllic 35-acre stretch of green lawn and water features, with a memorial hall, monuments dedicated by the various countries that participated in the war, and a memorial wall engraved with all the names of UN soldiers who died during the war. conflict.

His adopted granddaughter, Brenda Eun-jung Park, said when Grande buried the bodies he had recovered, “Promise, ‘I’ll get back to you.'” I will never forget you.” “That’s why he came back to Korea every year, to keep his promise.”

Beginning in 1988, he made annual trips to the cemetery – until the epidemic stopped travel. Park said that in May, even though Grande was battling cancer and getting weaker, he “insisted on coming to Korea” for one last visit.

Grundy died in August in the United Kingdom. His ashes will be transported to the United Nations Cemetery where he will be buried, according to the instructions in his will. “He wanted to rest in peace in the cemetery with his companions,” Park said.

The Korean War—sometimes referred to as the “Forgotten War,” despite the deaths of millions of lives—broke out in June 1950 after North Korean forces invaded South Korea.

The 22-nation UN Command helped shift the momentum of the war, with US-led forces advancing toward China’s border with North Korea. But Chinese forces intervened and pushed the United Nations back on the peninsula.

The two sides have reached an impasse along the 38th parallel, where the inter-Korean border is today. The armistice signed on July 27, 1953 halted the conflict. However, the war never officially ended because there was no peace treaty – and its influence continues to this day.

An American corporal watches a 9-year-old Korean girl lay a bouquet of white roses on the grave of one of his fallen comrades at a United Nations memorial near Busan, South Korea, in 1951.

For some veterans, the UN cemetery represents the cost of the war and the deep relationships they forged with other soldiers and with South Korea itself.

Boyd L. Watts, an American veteran who joined the war at the age of 18, told Hubs Magazine that he’s been visiting Busan at least once a year since 1991.

He said he was struck by how much the country had developed in just a few decades – a topic that was also emphasized at the cemetery. In a memorial hall, a video for visitors highlights South Korea’s transformation from a war-torn country into a thriving modern capital – made possible by the sacrifices of UN troops.

Other warriors who made return visits to Busan echoed the same sentiments.

Johann Theodor Eldewerld, who served as a private first class and fought hand-to-hand against North Korean soldiers, returned to South Korea in 2016 — the first time he had returned since he was demobilized during the war. According to a report by South Korea’s Yonhap News Agency, Elderworld said it was deeply affected by the country’s economic recovery.

He died the following year and was buried in the cemetery – following his will that said he wanted his ashes to be buried “in the Republic of Korea where my comrades lie in eternal slumber,” according to Yonhap Agency.

As the small group of surviving veterans progresses, a growing number – from places around the world – are requesting to be buried in the cemetery, alongside friends and comrades in a foreign country they once fought to defend.

Watts, the American veteran, told Haps magazine in 2010, “They buried a lot of us in an old mist…I’d love to be a part of it.” His wish came true after his death in 2020, as the ceremony was attended by relatives, friends, representatives of the military and the US embassy.

Another US veteran, Russell Harold Gunstad, served in the Military Police during the war and was buried at the United Nations Cemetery in 2020.

The United Nations Memorial Cemetery in Korea on August 21.

“Mr. Gunstad initially opposed the idea of ​​burying him at UNMCK, saying he felt as unworthy as the others lying there, but his wife and family managed to convince him to change his mind,” he told UNMCK in a statement on his website.

The last veteran buried in the cemetery is John Robert Cormier of Canada, who died in 2021 and was buried in June of this year. He was only 19 when he arrived in Korea for the war, and returned to the battlefield even after sustaining a life-threatening injury, according to UNMCK.

The UN mission in Kosovo said after his ceremony that his “great desire” was to be buried in the cemetery, adding: “He would have missed the 380 (Canadian) companions who waited for him here, and today they are back together again.”

Today, the cemetery, not far from the coast, is still a popular destination for travelers in war history, accessible by bus and subway. Admission is free, and a UN flag raising and lowering ceremony is held every day, with special events to celebrate key dates such as the outbreak of the Korean War.