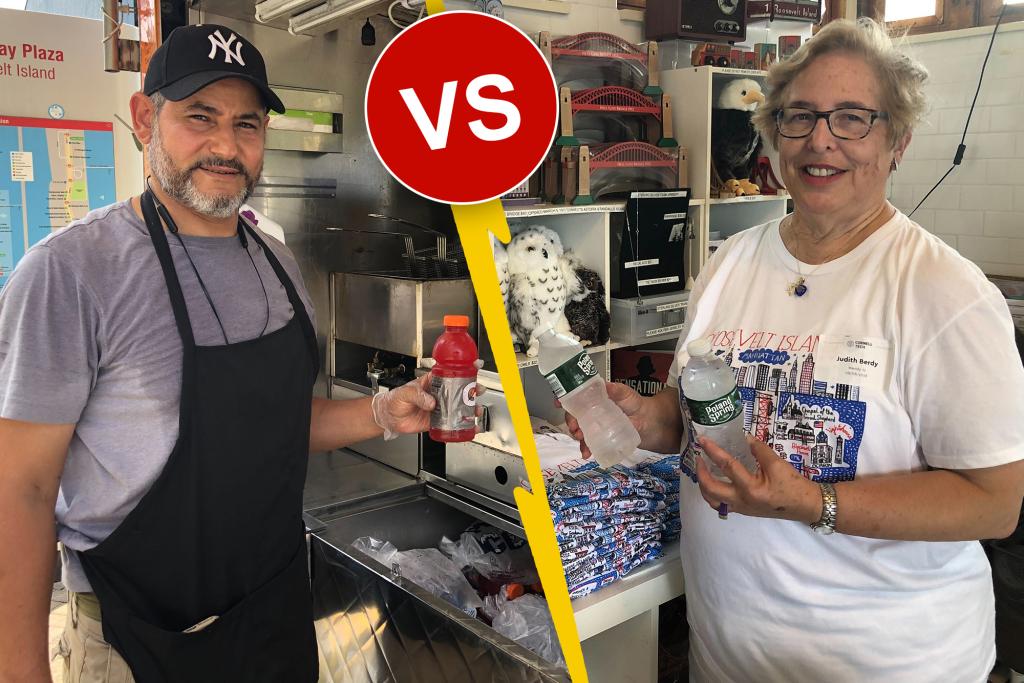 This island is not big enough for two of them.

A hot dog vendor and visitor center booth on Roosevelt Island have been fighting a turf war all summer over who should be allowed to sell cold drinks by tram stop to day-travel tourists.

Currently, A heat wave caused a sudden rise In demand for bottles of cold water, Snapple and soda, the problem has reached boiling point – and some locals are choosing a side.

Last June, Mohamed Afifi set up a cart to sell sausages, falafel and gyros to passengers disembarking from the cable car made famous in films like 2002’s “Spider-Man.”

But Judy Purdy, president of the Roosevelt Island Historical Society, said her organization’s wing, which opened in 2007, has taken a financial hit as a result — and she wants Afifi to move in.

“He stopped himself at our door,” Byrdie told The Post. “It couldn’t be closer without being inside the visitor center property.”

“Because the tram is not air conditioned and you have to wear a mask, people are very warm,” Byrdie said. “Beverages are an item that you make a little money for. If you charge $1.50, you make a dollar on that.”

In addition to novelties and island-themed clothing, the visitor’s booth sells soft drinks for $1.50 and specialty drinks like Snapple and LaCroix for $2.

“They don’t even come here to see the store or to get a map or any information,” Byrdie said. “They are turning away and it has really ruined our business and reduced our visitors.”

But Afifi, a native of Cairo, Egypt, said he had every right to do business on the island – and he was given a permit to prove it.

“I really sell food,” Afifi told The Post, noting that the drinks, which also include $2 sodas and snaps, are only a small part of his menu offerings.

She sells [drinks only]Added Afifi, whose vehicle was recently parked about 20 feet from the kiosk entrance.

She also complained that he didn’t have a price list, but Afifi said it was because the cart was also used in Times Square and he sells it at a lower cost on Roosevelt Island than Midtown.

The Roosevelt Islanders who spoke to The Post appear to be divided on the issue of the hot button.

Therese Manfakh, a retired engineer, said Afifi’s carriage makes the quaint island, with a population of about 12,000, more like bustling Manhattan.

“this is [vendor] does not represent [the island] “The way it should be,” said Manfakh, adding that she was worried more gigs would arrive.

Another longtime islander, Joanne Brooks, complained that the camper was “dirty in the eye”.

“I understand he’s taking revenue from the kiosk, which isn’t right,” said Brooks, who has called Roosevelt Island home since 1977.

But others seemed to be cuddling the wagon, which was occupied during the Monday lunch rush.

James Jimenez and Dylan Santos, who have lived on Roosevelt Island for nearly five years, said they had no qualms about Afifi setting up shop.

“We noticed him a few weeks ago,” Santos said, adding that it was “interesting” to see a regular carriage on the island.

“The kids love him,” Jimenez added. “I don’t see a problem with that.”

Purdy said she is petitioning the Roosevelt Island operator to move the wagon.

“Why do you hurt so little of the historical community? He can get a pass and go anywhere. Why do you have to put it in my face?” she said.

But Afifi said he wanted to be left alone.