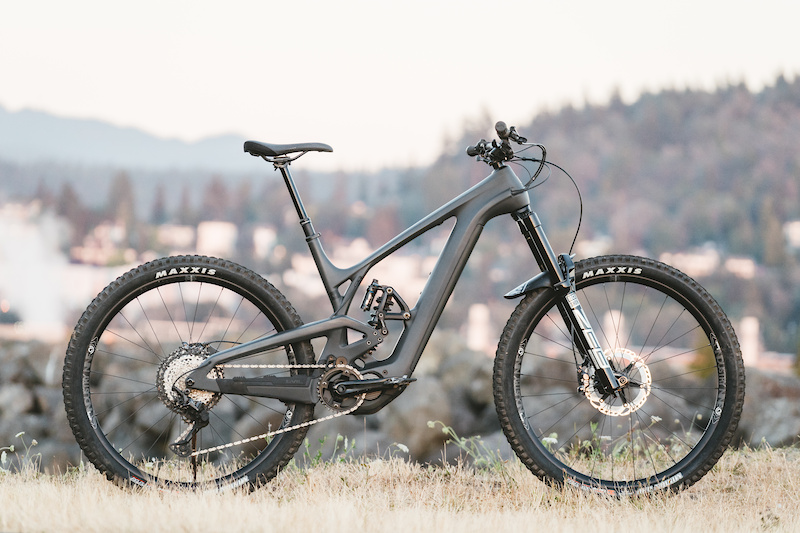 I’ve mentioned it a few times already, but Evil’s choice to give the Epocalypse a 65.3° head angle (adjustable to 64.6°) was really interesting to me, especially considering the non-motorized parallel Wreckoning at 64.6° in neutral position and adjustable down to 63.9 Degree. However, even when riding the Epocalypse in its steepest setting, the front end never felt shallow because the bike consistently felt firm and stable thanks to the weight of the motor and battery, and the rear end is short enough to prevent the bike from feeling unbalanced.

Even without the extra length, it feels better at higher speeds, navigating through choppy lines than making its way through low-speed tech. While it can keep up for good in slow, twisty places, it didn’t feel right at home there and made some effort to ride it—as you’d expect from a 170mm electronic ripper.

Although the freight train felt like many eMTBs, it cornered at surprising speed, likely thanks to a combination of the short rear end, moderate head angle, and well-supported but sensitive rear suspension.

It’s an oxymoron to call Epocalypse’s treatment “severely neutral,” but that kind of feels. The bike is ready for almost any trail, but it doesn’t lean too hard in any direction. It feels great when pumped through compression and pushed at higher speeds, it has excellent traction without feeling dead, it holds momentum and holds off-camber lines with ease, and the length is medium enough to keep the twisty sections fun.

It’s the same story in the air: The bike remains stable and will pretty much continue to move wherever it’s steered. She has enough energy to make lip-jumping and side swipes, but she’s a quiet enough wizard to stay predictable.

The Shimano EP8, like all EP8s before it, vibrated a bit at times, but the companies seem to be finally figuring out how to fit it into their bikes in quieter ways, and the noise level was actually much lower than some similar bikes on rougher slopes.

How do you compare?

Compared to our current standard of eMTBs — the Specialized Turbo Levo — the Evil Epocalypse has 166mm of rear travel to the 150mm Levo, a 630-watt battery to 700 Levo, and 29-inch dual-sport wheels compared to the mullet setup. The LEVO motor is noticeably quieter, and the in-frame screen is much more useful than the Shimano EP8’s. Epocalype’s extra ride comes in handy on bigger hits, though the Turbo Levo’s wide range of geometry tweaks makes it possible to give it more oomph-directed geometry than evil.

For some of the closest comparisons in terms of travel, Epocalypse finds its home among today’s other long-distance, self-shuttle travel platforms:

The Santa Cruz Bullit has 170mm of both front, rear and coil travel on a mixed-wheel setup, but it measures longer and faster than the Epocalypse—even on the chainstays despite the smaller rear wheel—making it aggressive but less maneuverable than the neutral package. Dealing with Epocalypse.

The Specialized Kenevo SL also has 170mm of front and rear travel, but in a much lighter, less powerful package with about half the torque and battery capacity of the Epocalypse. More in line with a regular mountain bike, the Specialized is taller and faster than the Evil, though its lower weight helps maintain maneuverability.

One of the more direct competitors to the Epocalypse may be the Yeti 160E, and it is in all respects with the same Shimano setup, purpose and similar intended specs. The 160E also features a slicker front end and slightly longer rear end, most notably a nearly $1,000 higher price tag for a very similar XT build.