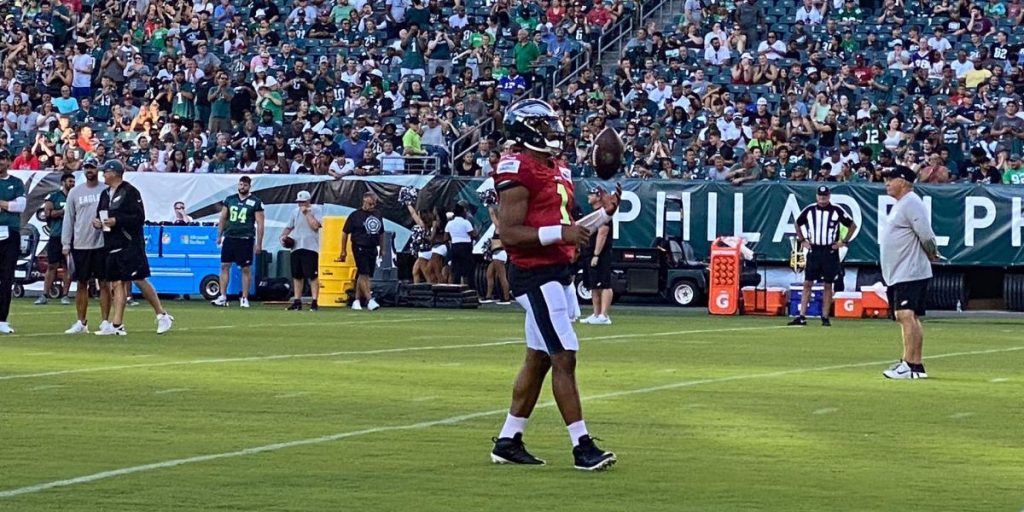 It was Galen Hurts’ 24th birthday on Sunday, and he spent it at Link with nearly 30,000 of his best friends.

This was a fun night.

Philly are you serious?? That was practice! 30 thousand plus here in practice! Nah I love it here already. Today was fun. Just the beginning ðŸ “¥

Despite the sweltering evening, the Eagles nearly filled the bottom bowl of Lincoln’s Financial Field Sunday night for their only general practice at training camp. The Eagles toured on Monday and will return to training on Tuesday.

1. Even general practice will not move housekeeping. Structure is important:

• You know he digs deeper into bootcamp when the injury report continues to grow. The Eagles were already without Jordan Milata (concussion) and Andre Dillard (concussion) and now they’ve added Le’Raven Clark (hamstrings) to the list. This means they were late to the fourth left intervention (Kayode Awosika) on Sunday evening. More on that in a moment. But the Eagles also reintroduced Jared Williams for obvious reasons. UDFA was with them not so long ago. The list is full at 91.

• During training, JJ Arcega-Whitside appeared to have sustained an arm/shoulder injury. Not long after catch an impressive dive. something to watch.

See also  Showalter: The Mets do not rule out the possibility of adding to the field

2. The highlight of Sunday night’s practice was a deep ball from Hurts to AJ Brown. Hurts dropped him in the bucket despite James Bradberry’s tight coverage for a 30-yard drop. Hurts hit Brown a lot during training camp and that hasn’t changed under the spotlight at Link.

3. Hurts also showed his legs Sunday evening. This part of his game doesn’t always appear in the training setting but it was in this session. On one particular run, Hurts had four runs, including one that left Brandon Graham clinging to the air.

It was awfully reminiscent of the big race against the Saints last season. This is the second time I can remember from Hurts this summer.

4. The Eagles retreated to their fourth left tackle on Sunday and it showed. Josh Sweet was fed Ousica early in practice. This could have derailed the crime completely. In the end, Sweat was out of the field for Derek Barnett. Perhaps it was out of mercy.

5. Jason Huntley’s sprint back started piling up the good days. Without Scott (concussion), Huntley gets more reps and makes the most of them. Break a run of 50+ down the left lateral line. Huntley has impressed me with his toughness the past couple of days, looking for connection, but what has always been his highlight is this blast. appeared that Link.

6. TJ Edwards puts a big show in every workout. Late in the practice, he nearly intercepted a Herz pass in the middle of the field. If he was able to secure it, that choice would be the play of the day. Still, PBU diving is worth mentioning.

7. Tight end Noah Togiai (a favorite on the Eagle Eye podcast) garnered some standout moments on Sunday from Gardner Minshew and Reid Sinnett. Without Calcaterra and perhaps now without JJAW, Togiai could demonstrate his ability. He still has a long way to go to make it to the roster but he can stay on the coaching staff.

8. Another long shot to make the team is Deon Cain. But the receiver, who wears the number 85, got plenty of passes during this camp. Again, it probably isn’t a spot for him on the list, but he’s making a big push.

9. Taron Jackson gave some plays on Sunday. The defensive end of the second year had reps from the first team as the defense took turns and made them count. It should be the fourth DE on the list.

10. During the middle of the workout, Sinnett ended up taking reps for the second team during one stint. Mincho didn’t look injured and took 2nd team reps later in the night, but Sennett got his first 2nd team reps in the summer. Sennett is clearly ahead of rookie Carson Strong for third in the QB.

Dumb watch of the night: During the first part of training, Hurts and Brown threw a soccer ball into the stands for the fans. So two lucky Eagles fans came out of Link with a great keepsake.