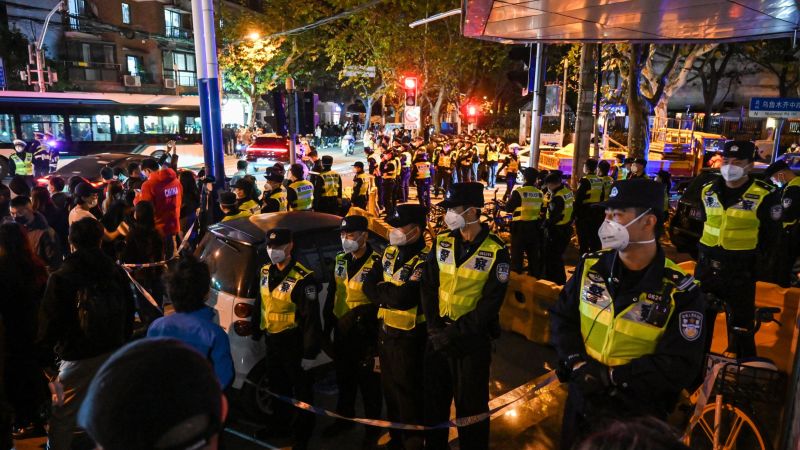 BBC journalist Edward Lawrence was arrested by police in Shanghai at the scene of Sunday night’s protests, according to the BBC, as captured in what appears to be cellphone footage of the arrest.

While he has since been released, a BBC spokesperson expressed grave concern about his treatment, saying he had been “beaten and kicked by the police”.

her protests It broke out all over China In a rare show of dissent against the ruling Communist Party, he has sparked anger at the country’s increasingly costly zero-Covid policy.

Among the thousands of demonstrators, hundreds called for the removal of the Chinese leader Xi Jinpingwho for nearly three years has overseen a strategy of mass testing, brute-force lockdowns, forced quarantines and digital tracing that has come at a devastating human and economic cost.

The BBC statement in full read: “The BBC is deeply concerned about the treatment of journalist Ed Lawrence, who was arrested and handcuffed while covering protests in Shanghai. He was held for several hours before being released. During his arrest, he was beaten and kicked by the police. This happened while he was working as an accredited journalist.”

The statement continues: “It is deeply disturbing that one of our journalists was assaulted in this way while carrying out his duties. We have had no official explanation or apology from the Chinese authorities, other than a claim by the officials who later released him that they arrested him for his own good in the event he was caught from the crowd. We do not We consider this a credible explanation.

At a regular news conference on Monday, Chinese Foreign Ministry spokesman Zhao Lijian acknowledged Lawrence’s detention, but claimed he did not identify himself as a journalist before being taken away by police.

Public protest is extremely rare in China, where the Communist Party has tightened its grip on all aspects of life, cracked down on dissent, removed much civil society, and built a high-tech surveillance state.

At least two clips of the arrest were posted online by a Twitter user who said he witnessed the scene. One clip, filmed from above, shows no fewer than four police officers standing over a handcuffed man with his face obscured.

In a second clip of a man dressed in the same clothes, Lawrence’s face is clearly recognizable, as he is quickly led away by police, who then yells, “Call the consulate now.”

The witness who posted the videos said that they saw the journalist being “trapped and dragged on the ground by several policemen.”

It is unclear what happened in the lead-up to Lawrence’s arrest. The video available online begins with his arrest and does not show what happened before.

In an interview with Sky News on Monday, the British government called Lawrence’s arrest “a matter of great concern”.

UK Business Secretary Grant Shapps said: “There can be absolutely no excuse for a journalist who was simply covering the ongoing operation to be beaten by the police.”

Lawrence wasn’t the only foreign journalist detained by Chinese police on Sunday. RTS said Michael Becker, a correspondent for Swiss broadcaster RTS in China, was briefly detained while doing live coverage of a protest in Shanghai.

Baker said on Twitter that he was released moments later.